Chicken breeds are defined by poultry standards that tell us how a breed should look. In the United Kingdom, breed create the standard and the Poultry Club of Great Britain approves it. The British Poultry Standards book has all of these standards together with photos of most breeds. By joining a breed club (usually just a few pounds per year) you should receive a copy of the breed standard for your chosen breed so you don’t have to go and buy the Standards book that is quite expensive if you only keep one or two pure breeds.

This page provides some information about the more popular UK chicken breeds for the beginner. There are of course many more available and if you want to see them all, I would recommend you visit the poultrykeeper chicken breeds pages where you can see all of the UK Standardised breeds and get more in-depth information.

A very common misunderstanding with newcomers to the hobby is that all chickens ‘are a breed’. Most chickens being sold as egg layers to beginners for backyard flocks are what we call ‘Hybrid Chickens’. Hybrids were originally created in the 1950’s as crosses of pure breeds and they were bred specifically to lay a large number of eggs in a year with a good ratio of feed to eggs and would mature and start laying quite quickly. Typically, a hybrid layer will be quite small and lay well.

Most hybrid crosses these days have fancy names like ‘Black Rocks’, ‘Cambridge Blues’, ‘Amber Stars’ and so on but they are not pure breeds. You cannot buy the males (they are sexed as day old chicks and removed) and even if you could get them, they wouldn’t breed true. To get more of the same kind of hybrid, you would have to go back to the original parent stock which are often pure breeds or at least, strains originating from pure breeds. To see a few photos of Hybrid chickens, take a look at my page on the best egg layers. These are my top picks of PURE BREEDS and they are found in the British Poultry Standards: 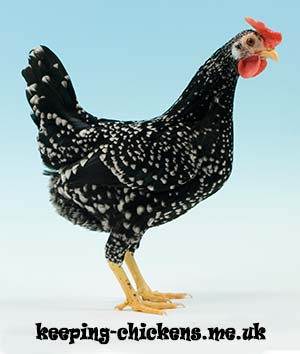 The Ancona is named after the Italian City of Ancona in the East of Italy. It is thought they first reached our shores in 1851.

Anconas are good egg layers and active foragers, they are usually very friendly birds. They can be hard to find these days, there aren’t that many good breeders around so do try to obtain them via a breed club recommendation. Many people believe the Ancona to be related to the Leghorn. It certainly looks like it could be from its type (type is the shape and way a chicken stands).

The large comb of the male birds can suffer from frostbite so care must be taken with the boys during colder weather. 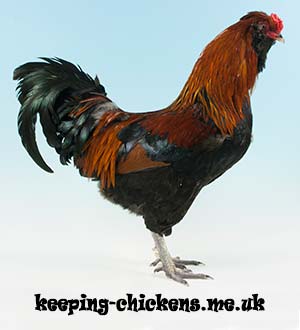 A good looking bird that has an attractive beard and crest. It is a hardy breed that lays a good number of medium sized blue to green coloured egg which makes an attractive addition to any egg box.  They should ideally be kept alone as they can be bullied due to impaired eye sight from their ‘head-gear’.

Araucana’s have been used to create a number of other blue and green egg layers but also Hybrid chickens that lay these colour eggs will have also come from the Araucana’s genes at some point. 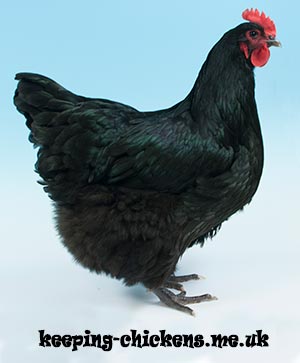 The Australorp was developed in Australia from imports of Orpingtons. The British continued to develop the Orpington for show making them profusely feathered and it is said that the Australorp was left alone, much more like the original Orpingtons that William Cook had created with better utility (meat and egg laying) qualities.

A good layer that is a calm / docile breed suitable for beginners. Australorps are active foragers and are reasonably hardy. Being a heavy breed, they cannot fly well so can be contained within low fencing.

The black Australorp’s colouring is beautiful, their backs and wings have a green iridescent sheen. 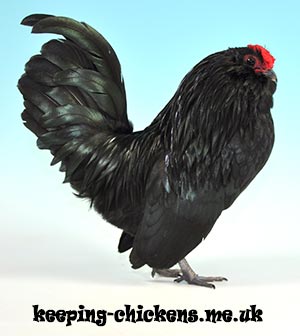 The Belgian bantam comes in no less than 5 varieties. They are a true bantam, which means they have no large fowl counterpart.

They are not difficult to keep but some varieties have feathered feet so must be kept out of the mud, which means they need to be kept in covered runs with sand, hardwood chips or another suitable dry substrate during wet weather. Belgian Bantams are active little birds and can become very tame if handled regularly from a young age, although some cocks have been known to be a little aggressive during the breeding season so take extra care with children and make sure you get to know your birds well. 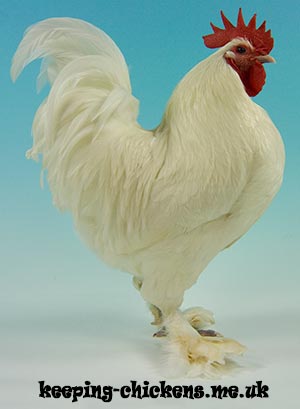 The Croad Langshan chicken arrived in England in 1872 when they were imported by a British Army major called ‘Croad’.

They are strong, heavy birds and are calm / docile in nature.

Croad Langshan’s do not fly so can be kept behind low fences although their feathered feet mean they should not be kept in muddy conditions. You will ideally need a covered run with a dry substrate like hardwood chippings or sand to keep them clean over the winter months.

This breed of chicken is a ‘dual purpose utility breed’, useful for both the table and as an egg layer. The black Croad Langshan is the most popular but white is also available. 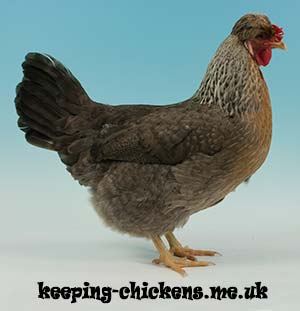 The Crested Cream Legbar is the most popular variety of Legbar and many consider them a separate breed. They have a small crest and thanks to their Araucana origins (see above), lay blue to green coloured eggs.

A big benefit of the Cream Legbar is that it is an autosexing breed – that is – day old chicks can be sexed by the colour of their down. This means if you plan on hatching chicks, you don’t have to feed unwanted male birds for 10-12 weeks as with other breeds before dispatching them, they can be dispatched easily when they are a day old. 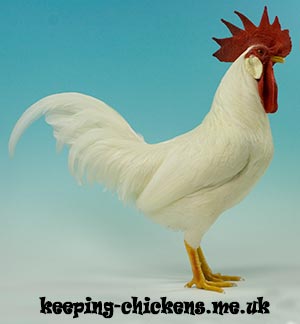 Together with the Rhode Island Red, the Leghorn has been one of the most instrumental in commercial egg producing breeds.  They are small and produce large numbers of white eggs and have a good ‘feed efficiency’.

The comb is upright on the male and flops over on the female. The leghorn can be quite flighty though, they can fly well (almost vertical take off it seems!) so make sure they can be kept securely in a run with a roof, or clip the primary flight feathers of one wing once their feathers have stopped growing to keep them on the ground. 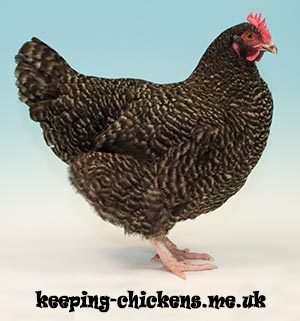 This breed comes from South West France where they take their name from the town of Marans.

The French Marans have feathered feet but the English standard calls for unfeathered feet. Originally they were a dual purpose breed but nowadays they are used more for their wonderful coloured eggs than meat for the table.

Utility varieties of Marans are classic ‘backyard hens’ for many. 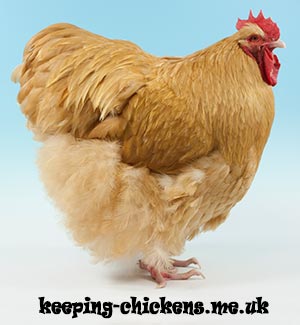 The Orpington is named after the town in Kent where it was developed by William Cook in 1886. They come in a variety of colours and are profusely feathered. Orpingtons were kept by the late Queen Mother and have been a hugely popular breed for a number of years.

Orpingtons are large (although their profuse feathering can make them look bigger) and require more space than other breeds. Because of their size, they prefer to perch on low perches. Orpingtons cannot tolerate getting wet very well so should always be provided with plenty of  shelter. 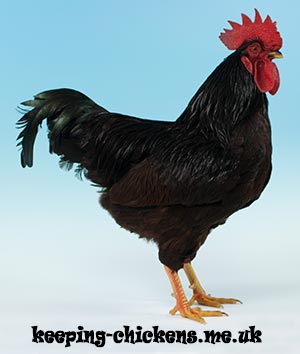 The Rhode Island Red is a good layer of large brown eggs and together with the Leghorn, has been one of the most instrumental birds for creating commercial hybrids.

In Europe where brown eggs are the predominant egg colour, it’s almost a given that every shop bought egg has come from a hen that has some Rhode Island Red genes.

The Rhode Island Red is well suited to smallholdings since it is a hardy bird that is good at foraging in a free range environment. It doesn’t fly too well so can be kept within a low fence. A Rhode Island White exists but is seldom seen, especially in the UK.

Of all the chicken breeds, the Sussex is one of my personal favourites.

The Light Sussex (shown left) is by far the most popular and is available in both large and bantam versions. They are a hardy breed that will be happy to forage for some of their food around the garden. The Sussex is called a ‘dual purpose utility breed’ that is, it is useful for both the table and as an egg layer.

A good choice for beginners that are also available as bantams if a small garden is all you have. 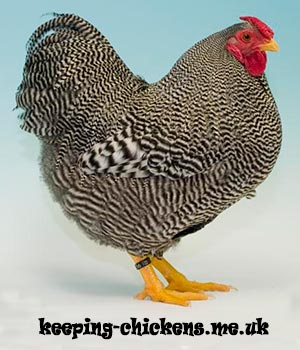 The silver laced Wyandotte was the first colour variety to be developed in America, being standardised in 1883. It is available in both large and bantam varieties.

The Wyandotte is a popular breed that is found all over the World and a multitude of colour varieties have been created, some only relatively recently.

Wyandottes are calm / docile and friendly birds that can become very tame if handled regularly.

They are good egg-layers laying around 200 eggs per year but are prone to broodiness which isn’t always desirable as hens will stop laying whilst sitting and their condition deteriorates.