My grandad once said to me “Where there’s chickens, there’s rats and mice” and how right he was. Over the years, I have had a number of occasions where I’ve had to fight a seemingly never-ending battle with them. There are a few things I have learnt along the way though and (touch wood) over the last few years, being more vigilant and removing food and water at night during the winter has really helped.

Rats are a serious pain in the bum and I am glad that I have only ever had one serious problem when I caught 10 of them in a week. They chew their way in and gnaw at chickens legs, steal eggs and spread disease.

They have to be near to water – so remove water at night if you get them to discourage them. They will move around so you might be fine in the summer to find them moving in during colder weather. I have found the spring traps to be of mixed success: you need to get them used to them and always wear gloves when setting them so they don’t smell you. Their favourite food seems to be cat food or tuna. Young rats are easier to catch but the older rats can be quite wise when it comes to traps. Place them in runs they are taking and provide cover over the top so they are out of sight and sheltered.

Poison is a very effective way of getting rid of them but do be careful using this, especially if there are cats that hunt rats and mice around the neighbourhood. Stuff bait packs into holes and cover with bricks or use a tubular box feeder with a clear tube so you can see the poison level left. 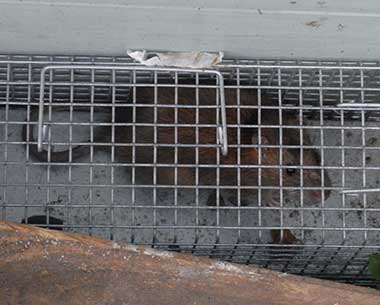 Rat in a humane trap. Dispatch is with an air rifle to the back of the head.

Personally, I prefer humane rat traps – they can be left set permanently near the chicken house. We dispatch the rat with an air rifle shooting through the back of the head. It’s an instant kill.

Always wear gloves when handling rats. They can carry serious diseases. Wear gloves when resetting the trap too since the smell from your hands would put off the next rat from going in there and usually where there’s one.. there’s several others.

Mice are the most common pest faced by the chicken keeper. They will spoil chicken food by urinating over it (whilst tucking in) and will urinate in water left out which is putting your birds at risk of catching disease.

Fortunately mice are easy to control with traps. I keep a couple of traps set near my feed in the shed where I will soon notice a problem during my daily feeding routine. Mice are usually a problem between October and April when food is scarce outdoors. 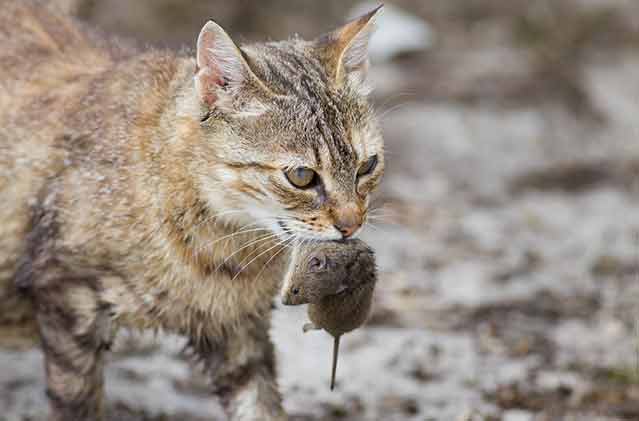 An enthusiastic cat is another good control method but remember to praise your cat when she brings a live mouse into the bedroom at 3am and meows at you…. Seriously! She is bringing you a gift and will be very pleased with herself, she cannot understand why you suddenly go mad and scald her!

The prevention of Damage By Pests Act